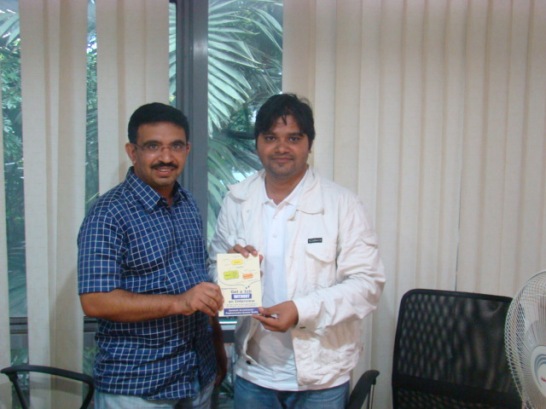 Authors of Get a Job WITHOUT an Interview with CEO & Founder, Narasimha I Darshan, Businessman I Philip, Cuppa Koramangala I Sudhir, Programme Manager at Helix Biolabs
Authors view (Santosh Avvannavar and Raghavendra Kumar Reddy): The idea to project took nearly 7 years (writing and publication took nearly 2 years), we were always fascinated with the slick book that were clear, specific and precise (minimal filler). A unconventional book that is likely to break the Q&A format and provide a framework to begin. Why such book are important for a long term career goal? We like to tell this through a story –

Einstein won nobel prize for physics, many ears waited earnestly to hear his innovation each and everyone in those days. Very often Einstein would get invited by a university to speak about his innovation and motivate others. His driver would wonder seeing the crazy people had for him, cheered ‘Einstein, Einstein..’ as he walked into the auditorium. The driver used to hear the same presentation each day and wondered, if one could get nobel prize by giving such talk – why can’t I? He proposed a deal with his master that he could present like him and deserves to win a nobel prize. Einstein was happy and curious to see if his driver could take his position. Einstein became driver and the driver became Einstein as a trial. As media wasn’t popular, people weren’t aware how Einstein would really look like. The driver was made to look like Einstein and Einstein took the driver seat. As the driver walked into the auditorium, people cheered ‘Einstein, Einstein..’, he was overwhelmed by the people response. Einstein was surprised and happy to see his driver making presentation just like him. At the end of talk, the driver (Einstein at moment) was about a take his seat, a lady got up from her seat to ask a doubt. Driver didn’t know the Einstein is awarded nobel for his technical contribution over only mere a presentation. The doubt was, ‘If a ball is made to move from one end of the earth through a hole and the ball has to come through another hole….”. Driver presence of mind was something to admire, after listening to the question he quipped,’Lady, you are asking a very simple question to a nobel prize winner, my driver can answer such question.’ He asked his driver (Einstein) to answer this question. Jokes apart! The story is an example of Einstein innovation over failure is the result of nobel prize, the prize was worth because it was clear, concise and precise. Hence the number of pages doesn’t define a value of book!

The paper back is available at http://pothi.com/pothi/book/santosh-avvannavar-get-job-without-interview

The ebook is available at http://www.amazon.com/dp/B00LFLQY6M

Published by Amrita Foundation for HRD

View all posts by Amrita Foundation for HRD