(Stages of Development)
Kohlberg’s breaks the development of morality into three levels –
Perconventional level (up to age nine)
In this level, morality is defined as obeying rules and avoid negative consequences. Typically these rules are set by parents, as defining moral law. The one who satisfies the child’s needs is seen as good and moral by parents and others.
Conventional level (age nine to adolescence)
In this level, parents expectation is being understood by children. Morality is seen as achieving these expectations. Following expectations and fulfilling those expectations are seen as moral law for children.
Postconventional level (adulthood)
In this level, one begins to understand that people in society have different opinions about morality and rules and laws vary from group to group and culture to culture. Morality signify in terms of upholding the values of the group or culture. The person would compare own beliefs to judge himself and others based upon higher of morality.
Author’s other writings are – The Departing Point I Black, Grey and White I Surrogate Author I Be a B.A. IGet a Job WITHOUT an Interview I Adhuri Prem Kahaniya I Second Heart I Dear Wife, Your Husband is not a Superhero

Sigmund Freud is known as father of psycho-sexual theory of development. He was born in 1856 in Austor-Hungarian, to a family of merchant. His theory has remained to be the most comprehensive and influential of personality created till present. His method of free association with patient’s (though instructed) to open up and say everything that comes to mind, irrespective of the level of embarrassment it may seem. The ‘open up’ was achieved through recalling dreams, and early childhood memories those reflected signs of unconscious wishes and fears. Several such studies led him to compare human mind to an iceberg which consisted of three parts –

a. Conscious  (The part which we are aware)

b. Pre-conscious (The part which consists of dream state, recent experience)

c. Unconscious (The part which we are not aware such as fear, passion)

The unconscious part is larger, as we are aware of the very small conscious at any given time. Hence the theory was linkened to an iceberg, that has majority of portion buried beneath the water’s surface. The water represent portion of that we aren’t aware of, unexperienced circumstances, and that isn’t integral part of our personalities, referred to the as non conscious.

He also said that the unconscious consists of three parts –

1. Id – This is already present since birth operating by the principle of pleasure through inner world of opinions and feelings. Examples – Nutritional, Sexual

2. Ego – This deals with external reality, while a person realises that the impulses cannot be achieved immediately ‘ego’ part reflects through reality than thoughts and opinions. It works on the principles of reality. This is also a stage between id and superego

3.  Superego – This represents the moral standards or thing, not the one that feels the best but the one which distinguishes the right and wrong.

Author’s other writings are – The Departing Point I Black, Grey and White I Surrogate Author I Be a B.A. IGet a Job WITHOUT an Interview I Adhuri Prem Kahaniya I Second Heart I Dear Wife, Your Husband is not a Superhero

Each of us have own interaction style with the physical and social environment that is deeply fixed, consistent, distinctive and characteristic patterns. This style is influencer of circumstances and time, as personality is shown via-a-via behaviour, thoughts and feelings. In other words personality is like fingerprints. That makes each one of us unique! Does it mean that we don’t have similarities?
Development of Personality
It’s true that each individual is different but some of us may also share certain similar personality. These similar personalities can be termed as Behavioral genetics, that combines psychology and genetic characteristics. These are often passed on from parent to child. What factors leads to development and formation of a person’s personality? Some psychologists say that they are genetic factors (some call this factor ‘Nature’) and environmental factors (also referred as ‘Nurture’). Some psychologists believe that these two factors are needed for a normal person’s personality development. These two factors keep competing to affect personality development. This argument can be justified in case of twin-study. There are two kinds of twins – monozygotic (identical twins) and dizygotic twins (fraternal twins). The difference between these twins is that both share same home environment but have different genetic makeup in the later. It is found by researchers that genetics difference can account for 40 to 50 percent of difference in personality traits and about 30 percent of difference in personality traits for environmental influences.
Often misleading general information is that genes are related to our personality traits. However, its has to do with our hormones and brain structure that influence our behaviour. As hormones and brain structure job is to control the development of our nervous and endocrine systems, which in turn controls our behaviour.
Childhood experience of a person (developing stage) can affect one’s personality a lot. The experience constitutes with family members, who are expected to meet the basic need of a developing child and siblings. There are two other important factors that contribute to environmental factors – culture and society. We can observe that members of different tribes leaving in the same place have shown that some tribe lives in peace, friendly and cooperative environment while the other group is hostile, assertive and competitive. There are two distinctive cultures – individualistic and collectivists cultures. Several studies have shown that western cultures have more of individualistic culture that has given more preference to internal locus of control or self-monitoring. The individualistic culture (that has locus of control or self-monitoring) teach to be independent, to feel good about themselves and see themselves as special individuals. On the other hand the collectivists cultures focuses more on the basic bonds between people and their connection. They are mainly dependent on family and friends.
Author’s other writings are – The Departing Point I Black, Grey and White I Surrogate Author I Be a B.A. IGet a Job WITHOUT an Interview I Adhuri Prem Kahaniya I Second Heart I Dear Wife, Your Husband is not a Superhero

“…All the stories, as a whole, gives you a feeling of incompleteness in love and, rightly serves the tagline of the book,”two people departed, in search of love, leaving love in between”.
“The language is simple, the authors have kept in mind that the stories can be read and understood by the mass. The Departing Point is a short, simple, and nice read.”

“…And finally I would like to dedicate this review to those tormented unfortunate souls who have suffered enough by the arrows of the cupid.” Read further – Jayasree

“…The plot is complex, the characters are all very strong and present and important. In short, it is a story that stays in and hits the reader, for better or for worse.” Read further – Kalyan 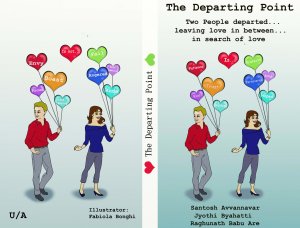 “…And finally I would like to dedicate this review to those tormented unfortunate souls who have suffered enough by the arrows of the cupid.” Read further – Jayasree

“…The plot is complex, the characters are all very strong and present and important. In short, it is a story that stays in and hits the reader, for better or for worse.” Read further – Kalyan

‘Education can give discipline, aspirations can give success’
Aspirations doesn’t have age!
All glory to God!

To know more about Surrogate Author

More about the book – Who is Authdas? I Authdas I Surrogate Mother

Author’s other writings are – The Departing Point I Black, Grey and White I Surrogate Author I Be a B.A. IGet a Job WITHOUT an Interview I Adhuri Prem Kahaniya I Second Heart I Dear Wife, Your Husband is not a Superhero

Inspite cine-goers prefer to see hero wins over villain and finally gets his love interest. A last line that often seen towards end of closure of movie “happily lived together ever after”, but few writer’s broke this style of conveying through killing the character’s. However the message conveyed was, character’s died but love is eternal/immortal and it would continue to exists. Some of those heartbreaking moments that were handled with serenity by moviemakers are –

These movies have helped us (author’s) to script a book ‘The Departing Point’ that not necessarily characters die but they depart here. Seven breezy stories with light humour is now available at stores Pothi , Amazon 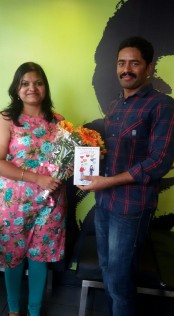 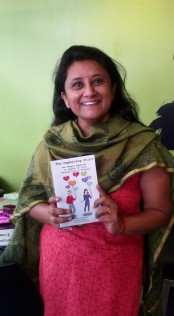 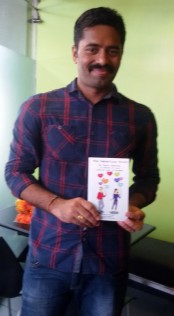 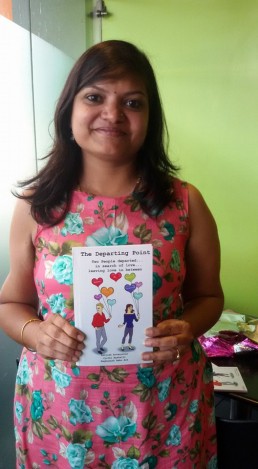 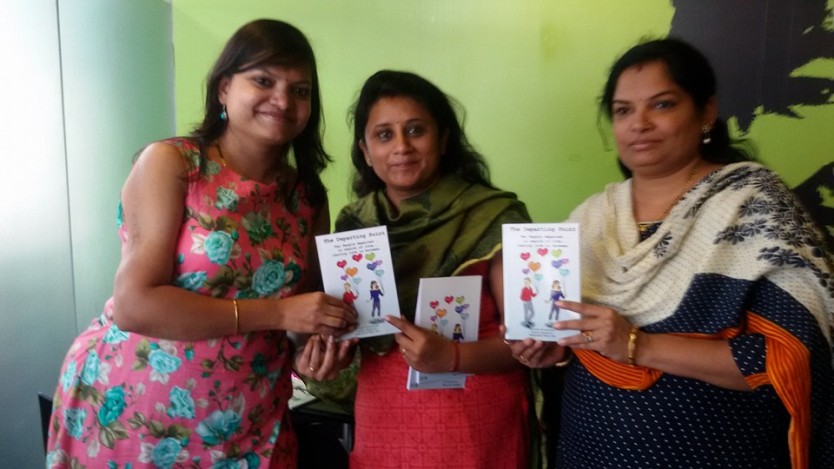 1. What is The Departing Point is about?

The departing point is about seven different love stories, which due to some circumstances did not meet the happy ending.

2. How different is the book from rest of love themed or romantic reads?

The book is different frm others because these are based on real life experiences which some of our friends shared with us. Another different is although these don’t have the happy ending, these have been narrated in a humorous way that doesn’t make the readers sad.

This book is meant for all those people who want to learn the different perspectives of love. The different faces of love. Also it brings out certain situations that are deterrent to a love relationship which can be avoided. We authors believe that this can help sustain healthy relationships.

4. Why does the book has U/A certification?

It has been U/A rated since a couple of stories are based on early teenage feelings and we do not want young readers to wrongly percieve the stories. Hence we suggest elders to guide such readers.

5. What is the objectives behind this book?

The objective behind this book is to give readers light entertainment as well as help them understand the different facets of relationships.